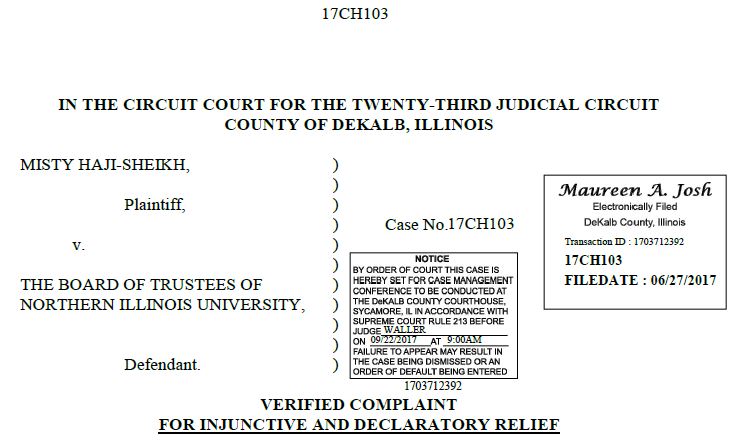 The recent action by the Board of Trustees of Northern Illinois University raised the hackles of many lawmakers when they voted to provide a golden parachute for malfeasance identified by the Office of Executive Inspector General.

We believed their actions were in violation of the Open Meetings Act as there was nothing on the agenda pertaining to a severance package. Working with locals in DeKalb, we assisted Misty Haji-Sheikh in finding a law firm to file a lawsuit to hold this board accountable to the rule of law.

Before we get started, and having nothing to do with this lawsuit, it is our opinion the entire Board of Trustees should be removed from office. First, those remaining trustee who voted to pay defense attorney invoices of employees pleading guilty to crimes against the university, and, second, the remaining because they “approved” this severance – calling it a “transition agreement” – laying the cost on the backs of Illinois taxpayers within months of an OEIG report detailing NIU President Baker’s mismanagement of Northern Illinois University. Shameful is too nice of a word.

Plaintiff is asking for:

According to Court records, the Board of Trustees of Northern Illinois University failed to properly place the severance agreement on a meeting agenda, failed to provide appropriate public comment, failed to publish Baker’s annual performance review, and failed to use such review in considering his severance, among other things.

What was listed on the agenda was “Presidential Employment – (review and approval)” – which is something entirely different than “Presidential Transition Agreement”.

FOIA Amendment should not be retroactive, amicus brief argues –

Illinois (ECWd) - Once again we find Illinois Governor Rauner is not only an established fabricator of truth but also one who is the recipient...

Illinois (ECWd) - While we have been exposing the Governor for his disgraceful lies in his efforts to smear his opponent, West Point Graduate Jeannie...

Newspaper is your news, entertainment, music & fashion website. We provide you with the latest news and videos straight from the entertainment industry.
Contact us: contact@yoursite.com